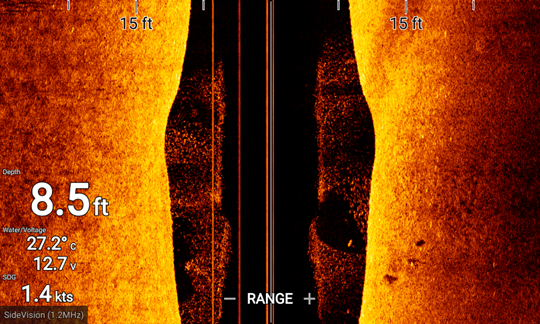 Not heard about the new Raymarine Element yet? I strongly suggest that you continue reading this article if you’re a passionate Freshwater / Estuary fisherman because this is going to excite you!

Before I jump further into the details of our testing and the results, I’ll quickly run through what the Raymarine Element is- and where it sits on the pecking order.

Raymarine has produced this New Element Model with a 7inch, 9inch and 12inch screen. The Element isn’t just a new model replacing the market proven dragonfly series, but a revolution in technical advancements suited within a budget of a mid-range unit, with high quality improvements.

One of the biggest stand-outs for us is the all new HyperVison imaging, this is running at a massive 1.2megahertz (with the option of 350 kHz as well) which gives you an insanely clear and crisp image in shallow water. As stated previously, this unit is more recognized as a shallow water sounder (up to 30m with 1.2kHZ Down/Side Scan) due to running at such a High Frequency). It will however give you some absolutely amazing sonar images like these that we captured during our water testing period chasing Bass and Saratoga in North Pine Dam (Brisbane);

Overall, the New Raymarine Element exceeded our expectations with the quality of images it produced. Starting at $1599 RRP for the 7’, it is one that must be looked at for anyone who is chasing a New GPS/FishFinder Sounder combo.

If you have any questions about this unit, we have been lucky enough to test and use it so feel free to give us a call today on 3265 8016.