Surtees boats are built where there are miles of pristine coastline, crisp rivers and lakes- New Zealand of course! Fishing is one of the top recreational sports in NZ. It’s no surprise that Surtees boats are the best in the business when it comes to aluminium fishing boats. Being built right in one of the fishing capitals of the world, Surtees boats have set the bar incredibly high.

Surtees boats were first conceived in the early 90’s, by Neil Surtees. He felt the need to make himself a boat that would be suitable for fishing off the Whakatane Coastline. It didn’t take long for the locals to notice Neil’s boat- it was truly unique in appearance and performance. Before long, there were more orders than he could handle! From there, the business began to grow into the world renowned boating brand it is today. With over 50 highly trained Surtees staff, the Surtees boats are the top-selling aluminium plate boat. Known for their quality, safety, stability and practicality world wide.

Surtees boats are Built to Fish!

Northside Marine has been part of the Queensland boating lifestyle for over fifty years. We are truly “Your boating partners for life!”. Come in and see for yourself why Northside Marine is Queensland’s biggest and best. 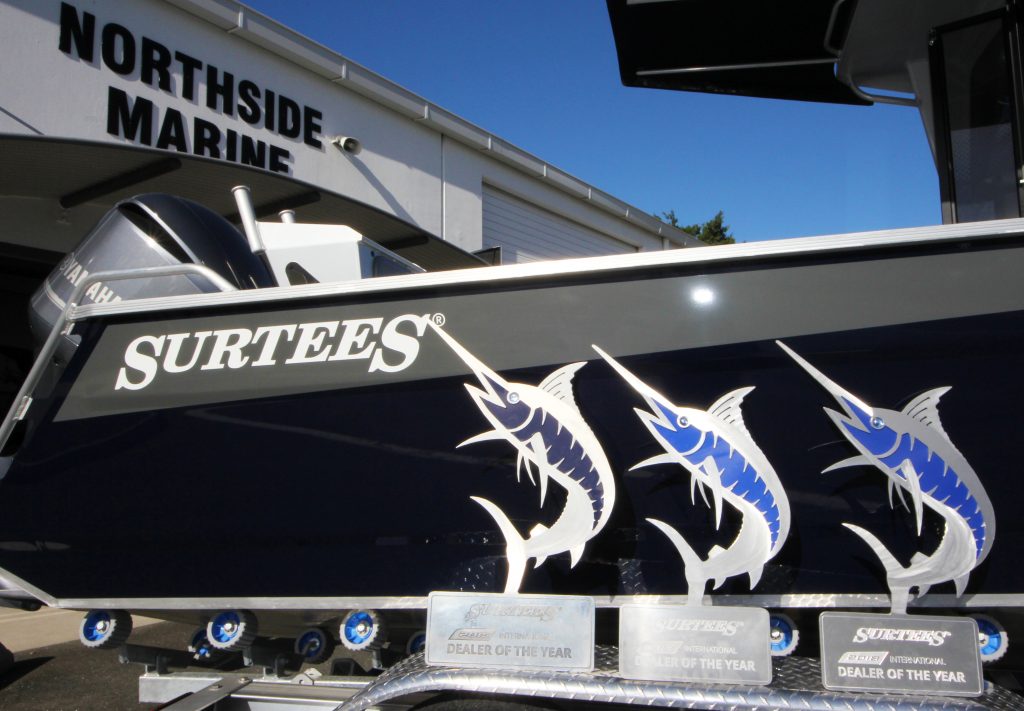 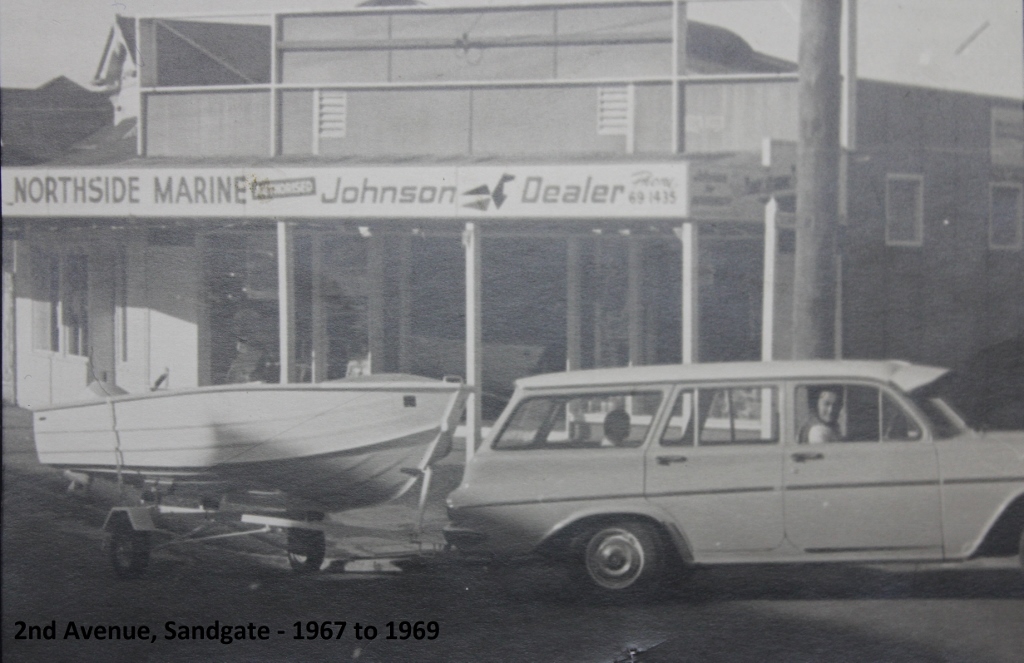 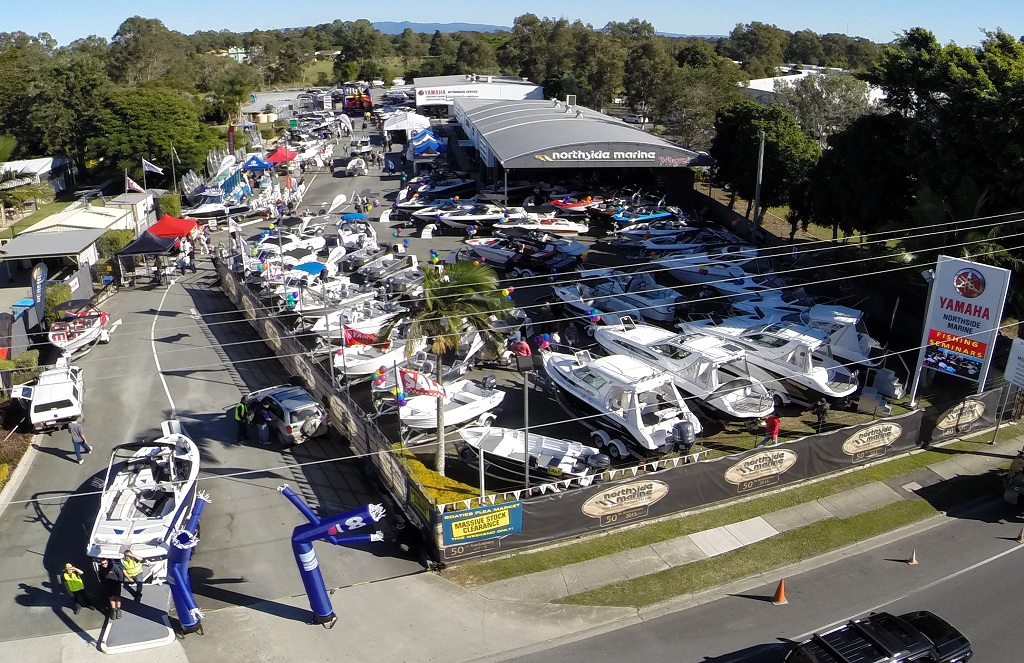 In 2015, Northside Marine celebrated 50 great years, and what a journey has inspired the Nickerson Family, and evolved into one of the largest marine dealerships in Australia.

Starting from humble beginnings in 1965, Keith & Marlene Nickerson opened a 30m2 store in Kift Street, Deagon to provide boating parts for local north Brisbane boaties. A year later they took on their first outboard brand, Johnson Outboards, which they continued selling for many years. The progression into selling boats and motors was a logical path as Keith had been sailing and power boating in the local area for a number of years.

Over the years Northside has cherished their long term relationship with many marque suppliers, companies like Malibu, Glastron, Stabicraft and Surtees, have now joined Whittley Cruisers (30 years), Club Marine (30 years), Stacer (20 years), and Yamaha Outboards (10 years) in presenting the best boating brands to their clients. Whilst there has been some brand changes, the one thing hasn’t changed is that it’s still under the Nickerson Family control.

Nowadays, under Greg & Trish Nickerson, Northside Marine is located on a purpose built 10,000m2 dealership only 20 minutes north of the Brisbane CBD in Boondall, QLD. It also boasts a 350m2 boating parts & accessories division, as well as a modern state-of-the-art service department.

Further and a real credit is that many of their 35 staff members have been with Northside Marine for over 20 years, and some for over 30 years, with 2 father/son teams on deck, and their current staff having a total of over 450 years of marine industry experience.

Hi Pep,I thought you and the team at NSM would appreciate knowing how appreciative my wife and I found your service yesterday.My wife told me that you all pitched in to give her excellent service when she came to pick-up our boat.I understand that you and a gentlemen helped hitch the trailer onto the car. And while doing this you noticed the trailer lights were not functioning correctly. I’m very glad to hear that this safety issue was resolved quickly and without fuss by Jason and perhaps others too.I’m very happy with the service you and Jason have been providing and look forward to the next time I require your service.All the best.Tim (October 2018)

Just to inform you what a great young guy Mark is in your Sales Dept.I contacted him early on this year over some accessory for my 495, he was totally helpful and a pleasure to deal with!He’s now assisting me come up with a trailer chassis I can bolt onto my pontoon so I can dump the 33 year old lifter and just skull drag the 495 up onto the chassis.I’ve had no end of trouble getting this project up and running but he’s been all over it and far exceeded any help from other businesses I’ve been to so far!Please treat this as your authority to double his salary forthwith!CheersIan (October 2018)

Dear Wayne,The Management Committee of Marine Rescue Bribie have requested I send you a letter of thanks for your generous support in getting gearbox problems rectified on our primary rescue vessel-Bribie 1.As you are no doubt well aware, voluntary organisations such as ours rely heavily on the fund raising efforts of our active members, government and general grants, and the valued support of businesses such as yours.Your support has enabled us to channel our available resources to our core function of marine rescue. Without well maintained vessels we would not exist .Your actions did much to alleviate the embarrassing situation where only one rescue vessel was available for us to carry out our duties.Again, thank you sincerely for your support. You can be assured that company’s generous support will be made well known to all members at VMR Bribie.John H. (August 2018)

Thanks for chat and cuppa yesterday, nice to catch up again!Just a quick bit of feedback on the great job your gang did on my service!Went like it was on rails thanks to Wayne organizing the whole thing, Glen looking after the business end and Gordon as always being thoroughly efficient and great to natter to!Had a dream run back home inside of St Helena and Green islands!See you next year!CheersIan (April 2018)